Visit of the BahnJournalisten Schweiz to Amberg Technologies AG 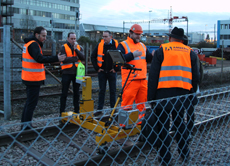 On March 8th, Svein G. Vatslid, CEO of Amberg Technologies AG, together with other Amberg company representatives, received a delegation of around 40 members of the Swiss Railway Journalists' delegation in Regensdorf. The delegation consisted of media spokespersons, opinion leaders, media representatives and interested guests from the railway sector and the railway industry.

After a short welcome by the event organizer Kurt Metz and the host Svein G. Vatslid, including a short introduction to the Amberg Group and its history, an exciting series of lectures followed with a varied presentation on the topic "The Swiss Railway Industry in North America".

After a short break, Adrian Andermatt, Head of Sales & Business Development at Ruf Telematik AG, spoke about the challenges on the world market and about the North American market. Johannes Winter, Head of Operation Services at Doppelmayr reported on urban cable cars in North America today and tomorrow. The event organizer on behalf of BahnJournalisten Schweiz, Mr. Kurt Metz, whom we would like to take this opportunity to express our sincere thanks for coordinating the event, presented the participants a summary of his experiences in four states in the West in the autumn of 2017: Surprising and encouraging news in US public transport.

Finally, Stefan Basler, Head of Sales at Amberg Technologies, discussed the subject of track geometry and the corresponding market segments. Subsequently, the participants were introduced to the more technical subject of track surveying with a practical product demonstration on the nearby industrial track. The Amberg IMS 3000 System (track measurement system) and the Amberg GRP 5000 System (mobile scanner solution for powerful infrastructure analysis) were used. Among other things, a possible light space injury was explained, pointed out and illustrated by means of a scan.

After an exciting and adventurous afternoon, the participants and speakers had the opportunity to exchange views over an aperitif and end the day with a cosy dinner.

"The visit of the BahnJournalisten Schweiz and the resulting interest in our company, our products & services is a great honour for us. We would like to thank all speakers and participants for a very exciting and successful event that promoted mutual exchange among specialists, interested parties and media professionals in the railway sector", says Svein G. Vatslid, CEO of Amberg Technologies AG.